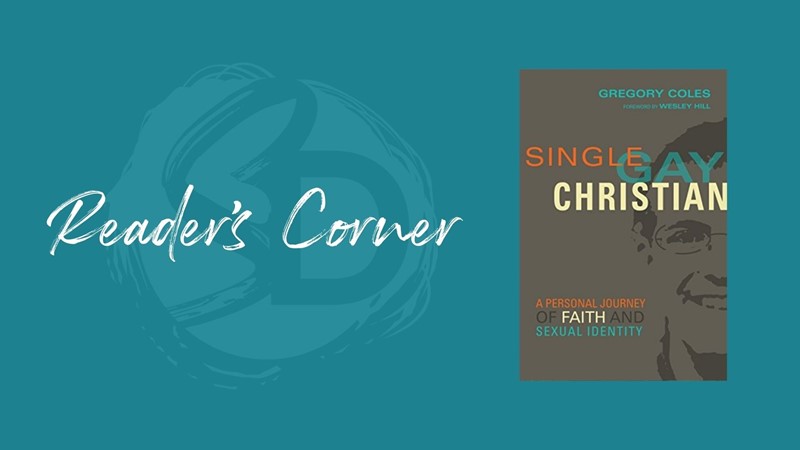 Single, Gay, Christian by Gregory Coles is a small, easy-to read book that packs a powerful punch. Coles is exceptionally articulate and does an excellent job of communicating his thoughts and feelings.

Coles wrote the book as if he is sharing his ponderings and experiences with you, a trusted friend. As you read, you feel as if you are his confidant, listening and learning as he processes his early experiences with attraction to men, his wrestling with God to make him straight, his examination of the Bible to make sense of his experience, and his choice to sit in the tension of longings that God hasn’t taken away.

I found this book particularly helpful to understanding one man’s experience of gay attractions while still clinging to the love of Jesus. So often, LGBT issues become a conversation to debate, missing the humanity of those about whose lives we deliberate. Greg invites us to zoom in on his experiences and share his tensions—up close and personal.

Reading this book, you can’t help but garner an affection for this young man. He is authentic, deep, caring, delightfully bright, funny, and sincere in his love for Jesus. Greg is honest about where he is still wrestling and doesn’t pretend to have the answers to many pressing questions, even as they overlap with his own experiences.

The title of the book brings forth the debate with which Greg’s name is sometimes associated. Can a follower of Jesus also claim the title “gay”? Aren’t the words “Christian” and “gay” mutually exclusive? Greg explains why he has chosen this adjective to describe himself rather than the commonly used evangelical description “same-sex attracted.” Whether or not you agree with his conclusions, he brings light to the complexity of the issue.

My only hesitation with this book is not what it contains, but what it lacks. There is a deeper layer yet to uncover. Single, Gay, Christian expresses Greg’s wrestling with his gayness mostly in light of the sinful behavior he is called to avoid. He explains that he will never get married because he is not attracted, and likely never will be, to women. I think there is more to it than that–not just for Greg, but for all of us. Following Christ is about more than surrendering our behavior. Additionally, we must examine how we have integrated the world’s system into our assumptions and reasoning. “Do not conform to the pattern of this world, but be transformed by the renewing of your mind” (Romans 12:2).

God not only wants to address the potential for sin in our lives, but also bring to light how we each have been influenced by the thought patterns of our culture. Without question, our western culture has increasingly given sexual desires and experiences an exaggerated voice in our identity and decisions. What’s more, we’ve learned to make life decisions about love and marriage largely based on felt attractions.

Works like Nancy Pearcy’s Love Thy Body and Carl Trueman’s The Rise and Triumph of the Modern Self help us understand why our sexual desires and sense of “sexual” selves have become such central components of our identities. As Trueman writes, “In biblical times or in ancient Greece, sex was regarded as something that human beings did; today it is considered to be something vital to who human beings are.”These western assumptions confuse not only those who experience same-sex attraction or gender dysphoria, but also Christians who no longer feel love or attraction within their marriage.

If our sexual desires are such a determinant, what about the bi-sexual Christian? Or how about the woman who discovers, a decade into her marriage, that she is actually attracted to women? I wonder if much of our wrestling with Scripture is amplified by the assumptions of sexual desire, personal experience, and identity that are rooted in the world’s system of thought, which is passing away (See I John 2:17).

I would love to see Greg wrestle with questions like: To what extent have we bought into the lie that sexual experiences and desires must be part of my identity? Why do the Scriptures fail to identify people by adjectives like “single,” “heterosexual,” or “married” as identity markers?  And is it possible that entering into biblical marriage is more of a call to unique covenant relationships and potentially has little to do with sexual attraction?

From what I’ve already seen in Greg, it wouldn’t surprise me if these themes show up as he continues to mature in ministry and his personal journey.

The Importance of Sexual Discipleship™

For the past few years, I’ve been using this term “sexual discipleship™” to describ...

I remember standing in the grocery store checkout line not more than five years ago while listening to a po...

Purity culture has been a topic of conversation for several years as Christian women who were teenagers in ...

See which tags match your interests. Create an account today